You are here: Home / In my garden / Beautiful Saturday

With a forecast of a beautiful pre-Spring day of 18C and blue skies, Graham and I decided to spend most of the day in the garden. But before we got started we went to visit a local reserve where wild orchids and other beautiful but miniature plants grow. He’d not seen it before and it was the perfect way to start the day. Came back home for a cuppa and then off to work outside.

First off we had to clear up all the dry liquidamber seed pods lying on the front lawn. They would become projectiles when he mows and our front windows would be targets, so we had to clear them up and the autumn leaves lying with them. Three and a half wheelbarrow loads later, that was done.  We used that for mulch around our rose garden in the paddock. Graham went off to clear the rest of the lawns from branches that had fallen in recent winds, in preparation for mowing. I got our wagon out and filled it with potted loropetalums, my small garden tools and camera and off to the paddock to get some more planting done. Using our Power Planter always cuts down on the amount of work required in digging holes, these days, and we get a lot more done in a session.

Graham had already loaded up our fire-pit, waiting for a suitable time to burn, as recent weeks have been incredibly windy, but today was beautiful, calm and clear and dry, and so, for the very first time, he was able to set the fire-pit alight! And it is very effective for using for burning off, as well as a camp fire or barbeque. 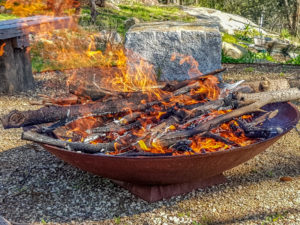 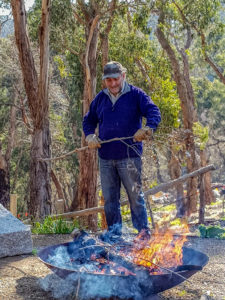 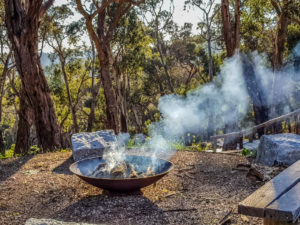 I managed to get 6 loropetalums into the ground, several succulents that had been sitting in pots for ages, a low growing banksia shrub, a Eucy Dwarf that has pretty pink flowers if the tag is correct, and several other plants. We also cut up some wire we had to create cages around the loropetalums and a native hibiscus that the wallabies (and possibly a wombat too) had been showing a taste for. It took longer to do the cage surrounds than it did to drill the holes and plant the plants. We’d been losing the flowers and leaves off these from previous plantings so had to cage things up, including our new Silver Princess Eucalypt that had also been eaten. Love the wildlife but really want our garden to grow a lot more before the wildlife decide to do some pruning for us.

Afternoon tea was spent sitting by the firepit, watching the Black Pacific and Australian Wood Ducks in our billabong and wandering around the property. Every now and then one of the maggies would swoop them and send them back to the billabong. The magpies have a nesting tree in the bottom right hand corner of the paddock and they don’t like any bird life wandering near by – even if they’re on the ground and not in the air. Was a bit comical to watch.

All in all, a very productive day for us both and such a gorgeous day to be outside virtually all day. We loved it although our backs were feeling it somewhat at the end of the day – not from planting, but from bending over to manage the wire that kept curling up and also picking up heaps of branches and twigs, etc. And, as we were packing up I noticed the late afternoon sun highlighting the beautiful Epacris Impresses (Common Heath but I don’t think of it as common) in the native garden section of our paddock.